Serious air pollution has recently aroused wide public concerns in China. The traditional method of quantitative remote sensing model is not only sophisticated but also inaccurate to fetch the exact PM2.5 data near the ground. Though the built- up ground monitoring stations can now provide sufficient PM2.5 observation data with high sampling frequency, there still exist many extreme outliers due to inevitable observation noise. Therefore, in this study, we adopted Kalman filter for optimal estimation of time-series of air quality data in 338 cities of China and comprehensively analyzed the spatiotemporal distribution pattern during the period of 2015. In our detailed analysis, we used DTW based K-Medoids clustering to classify cities into 4 levels according to their contamination degree, and utilized q statistic technique to evaluate the spatial stratified heterogeneity of PM2.5. The results show that by using Kalman filter, noise can be effectively reduced and value of PSNR can be significantly improved. In the study of temporal distribution, we found that PM2.5 followed a'U'curve in yearly temporal distributions while daily temporal distributions obeyed a'W'curve. PM2.5 density is much higher in winter than in summer in China, and spatial stratified heterogeneity is even more pronounced during the fallwinter stage. In the study of spatial distribution, it can be clearly seen that PM2.5 appears a'Dual-core'pattern across China where concentration of PM2.5 spiked at Xinjiang and North China plain. In contrast, Xizang, Guangdong and Yunnan are more stable areas with excellent air quality, ranking first-tier nationwide. 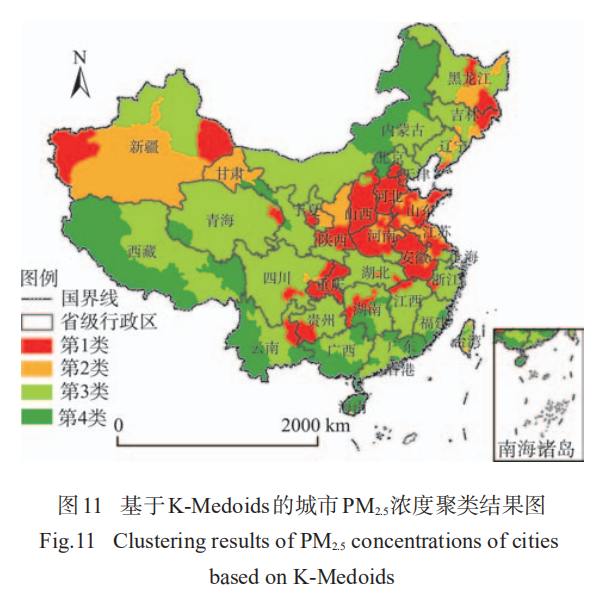