Background: Multiple mechanisms have been proposed to explain how greenery in the vicinity of people’s homes enhances their mental health and wellbeing. Mediation studies, however, focus on a limited number of mechanisms and rely on remotely sensed greenery measures, which do not accurately capture how neighborhood greenery is perceived on the ground. Objective: To examine: 1) how streetscape and remote sensing-based greenery affect people’s mental wellbeing; 2) whether and, if so, to what extent the associations are mediated by physical activity, stress, air quality and noise, and social cohesion; and 3) whether differences in the mediation across the streetscape greenery and NDVI exposure metrics occurred. Methods: We used a population sample of 1029 adult residents of the metropolis of Guangzhou, China, from 2016. Mental wellbeing was quantified by the World Health Organization Well-Being Index (WHO-5). Two objective greenery measures were extracted at the neighborhood level: 1) streetscape greenery from street view data via a convolutional neural network, and 2) the normalized difference vegetation index (NDVI) from Landsat 8 remote sensing images. Single and multiple mediation analyses with multilevel regressions were conducted. Results: Streetscape and NDVI greenery were weakly and positively, but not significantly, correlated. Our regression results revealed that streetscape greenery and NDVI were, individually and jointly, positively associated with mental wellbeing. Significant partial mediators for the streetscape greenery were physical activity, stress, air quality and noise, and social cohesion; together, they explained 62% of the association. For NDVI, only physical activity and social cohesion were significant partial mediators, accounting for 22% of the association. Conclusions: Mental health and wellbeing and both streetscape and satellite-derived greenery seem to be both directly correlated and indirectly mediated. Our findings signify that both greenery measures capture different aspects of natural environments and may contribute to people’s wellbeing by means of different mechanisms. 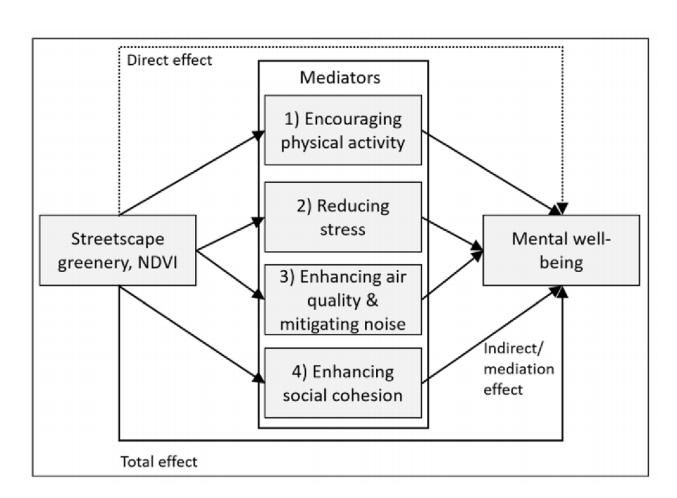